On Covid-19, Polling Inaccurate Reporting – and Why People More Likely To Share Misinformation Than Believe 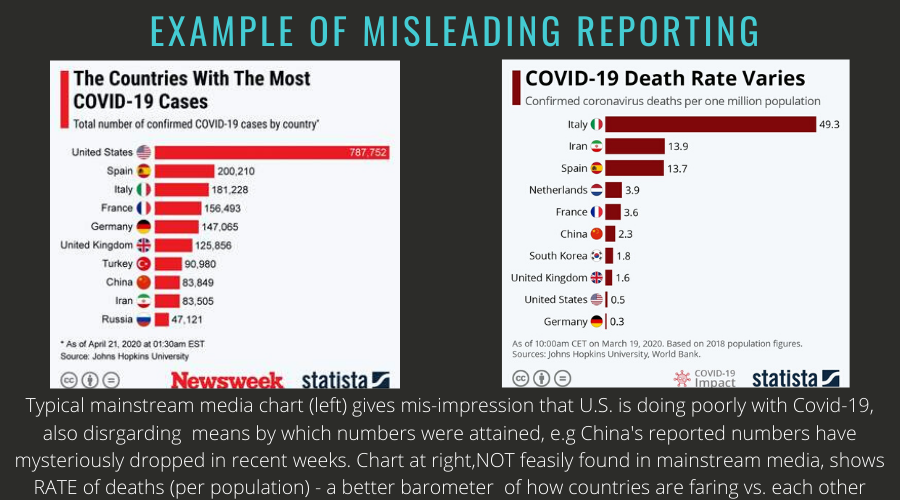 On Media’s Doomsday Narrative: Covid19 Cases Are Up But Failing to Report Most Important Facts, i.e. Testing and Death Rates

Every day it seems to be another doomsday story from the media, about people not social distancing or wearing masks – or a new spike (favorite media ‘bite’) in covid-19 cases. But, if things were really still so bad, why would even blue states like CA and NY be opening up amidst a crisis? Truth is that the media KNOW the truth just like most people do (see last article below)- they just don’t report it correctly.

Among the latest news spin we learn that there are covid-19 cases are ‘spiking’ in Texas and other places. And that’s usually about where the news end. Left out are these facts, according to latest FULL STORY as reported by MIT:

Those last two points certainly change the whole story (that with more testing there will be more known cases) and when you add in the fact that businesses were opening up again and that a ‘spike’ was expected the results were actually pretty good news! Not the continued doomsday drum beat narrative by the media.

Surprising how many ‘legit’ news sources-including those leaning GOP- will quote polls at will without source-checking, e.g. Biden with 14 point lead over Trump. How quickly we forget that Hillary was quoted with the same lead in the polls four years ago when Trump beat her (even if one goes by the popular vote there was 1-2% difference – far from 14%. There was a time when polls were fairly accurate in predicting outcomes and popularity but no more in this partisan society where media have no problem leaving out the ‘science’ and polling, for example, only it’s own audience skewed as it may be.

Furthermore, if one were to really vote for Biden over Trump – which would not be surprising for Democrats – we must come
to the conclusion that the candidates are mere figureheads. You could plug anyone into the slot and he or she would win since the Dims now seem to only vote in lockstep.

A new study found people were 50% more likely to share misinformation than to believe it.

Even the above header in a story telling us about communication failures seems to skirt around the key issue that people are quite dishonest in reporting their believes, certainly when it comes to Covid-19. The story goes on to ‘apologize’ for them by saying that they’ll be better boys and girls if they’re given a ‘nudge’ to tell the truth. There was a time I remember growing up when we didn’t have to be reminded to tell the truth.

-Fake Noose – Rest of the Story- News and Notes Not covered in mainstream media
-More To Riots and BLM Than Meets the Eye, Fake Noose –