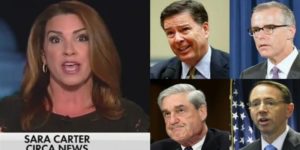 Principle players in both Russian/Trump Election ‘Collusion’ and now FISA -Dossier Investigations including Sara Carter, Circa, who was instrumental in uncovering much of the Dossier data that had been stonewalled by the FBI and others nearly a year 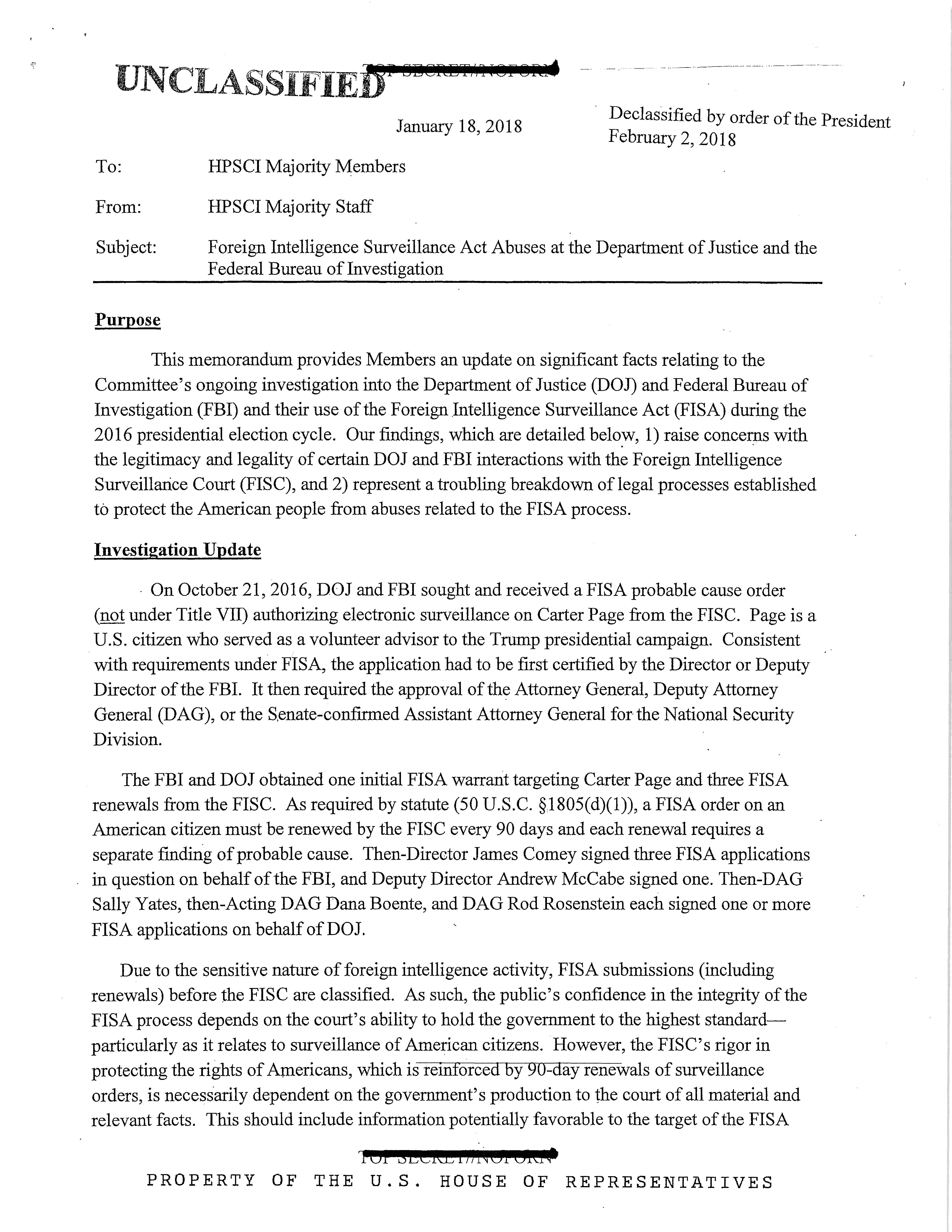 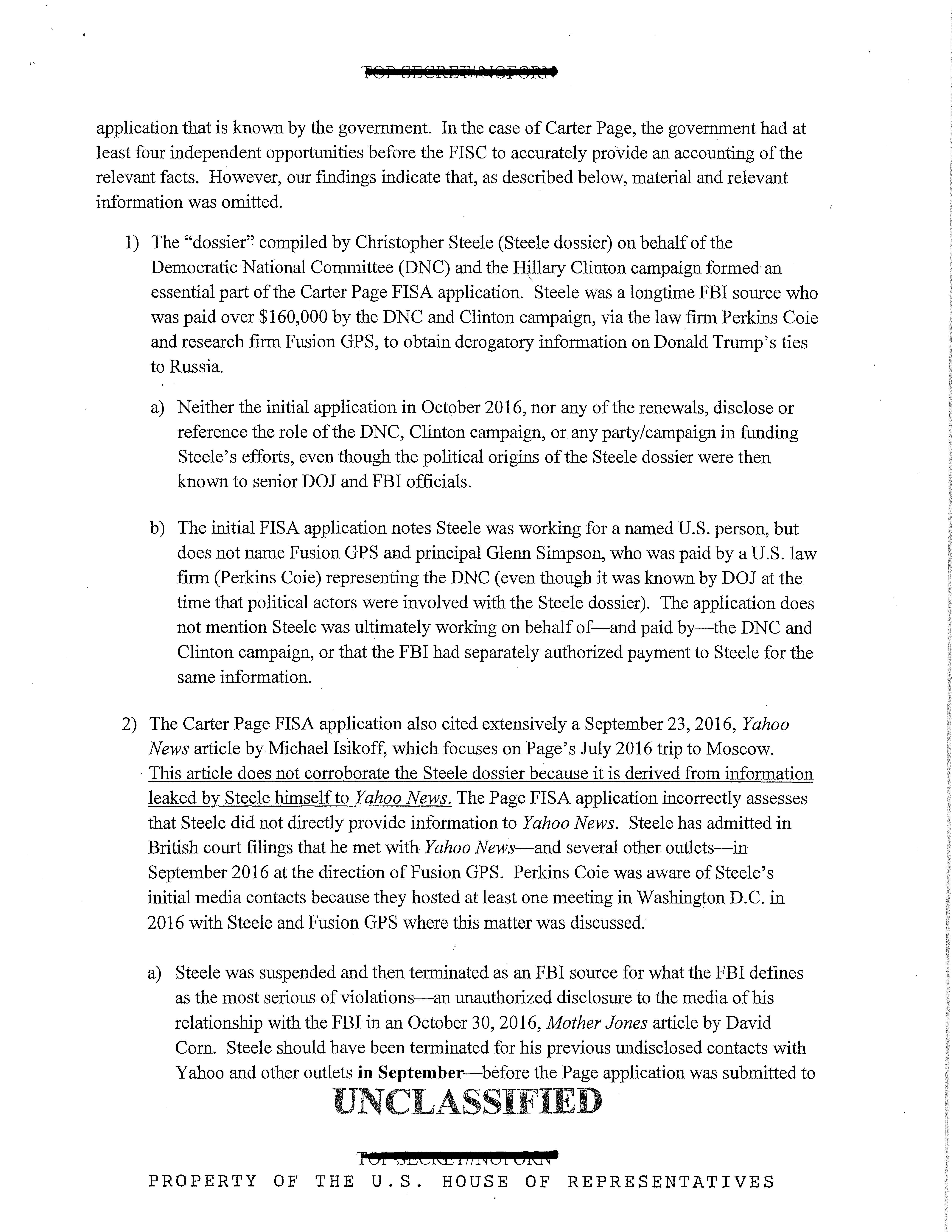 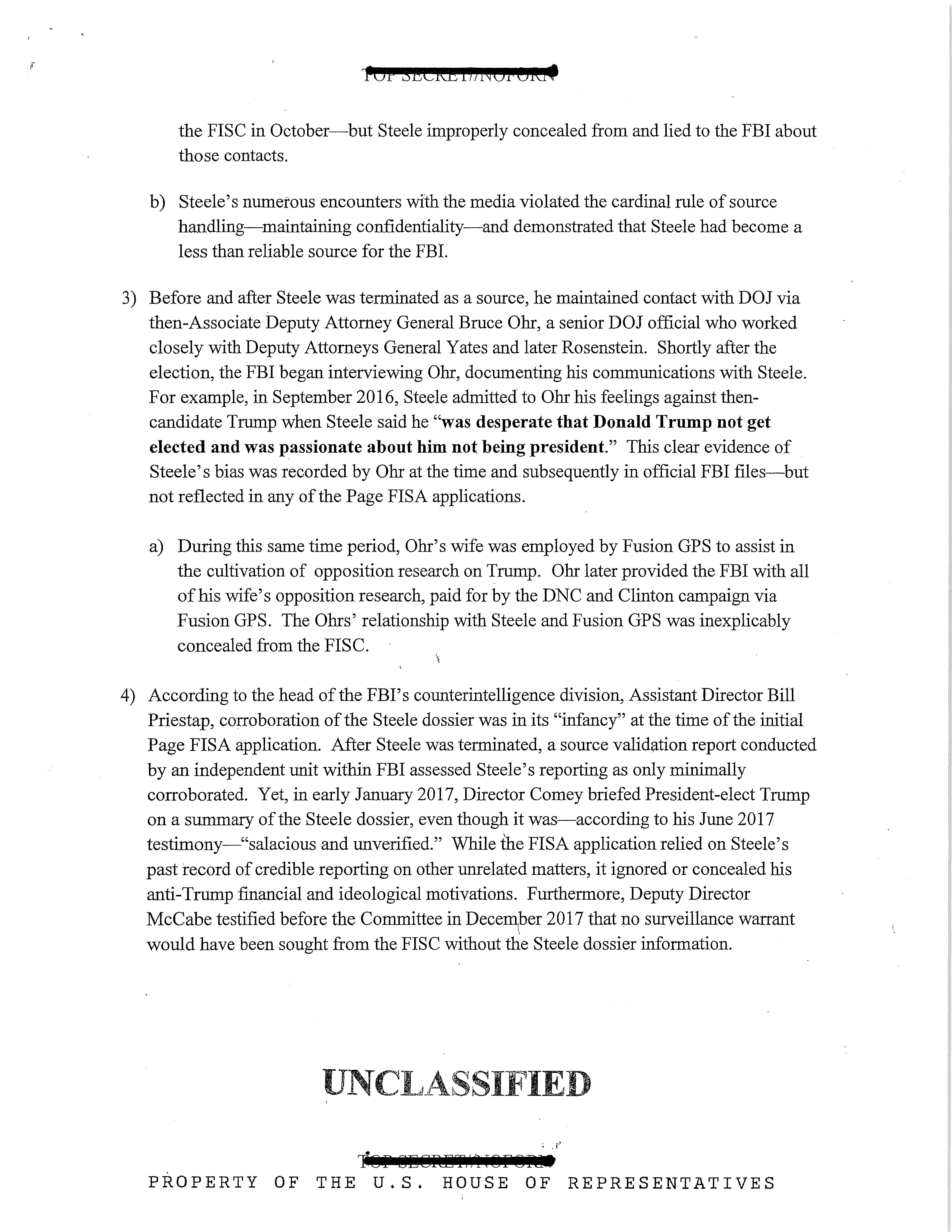 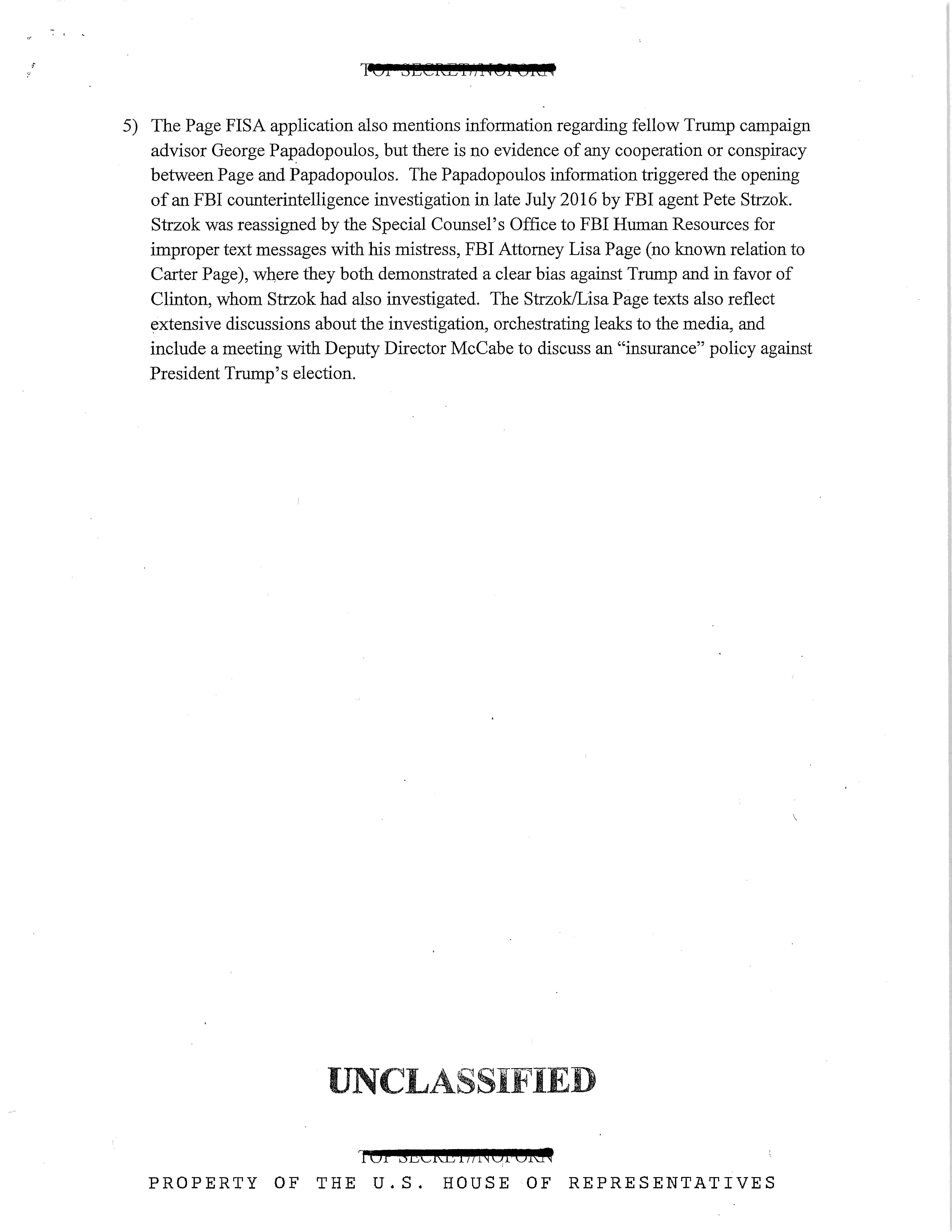 Opening Note authorization the release of the memo: 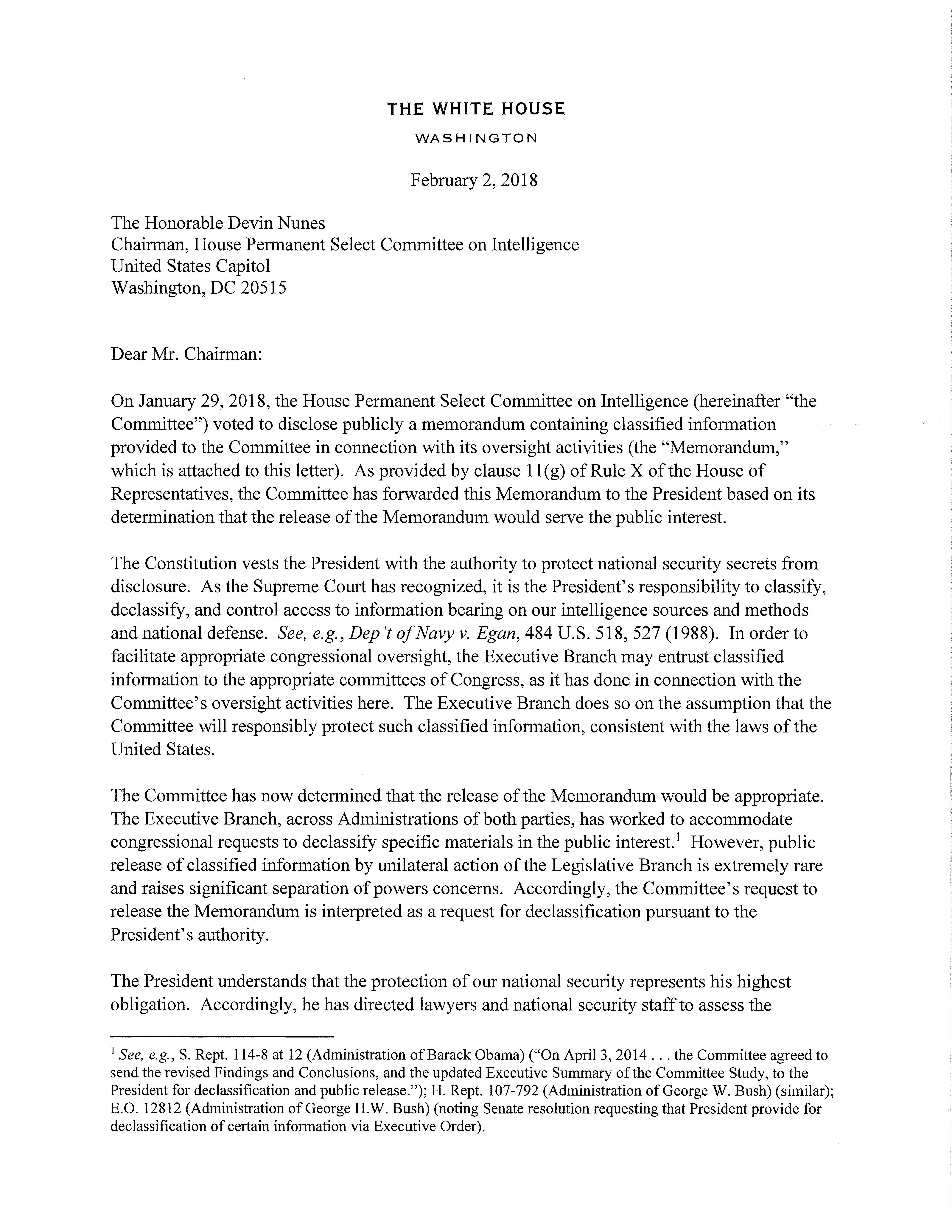 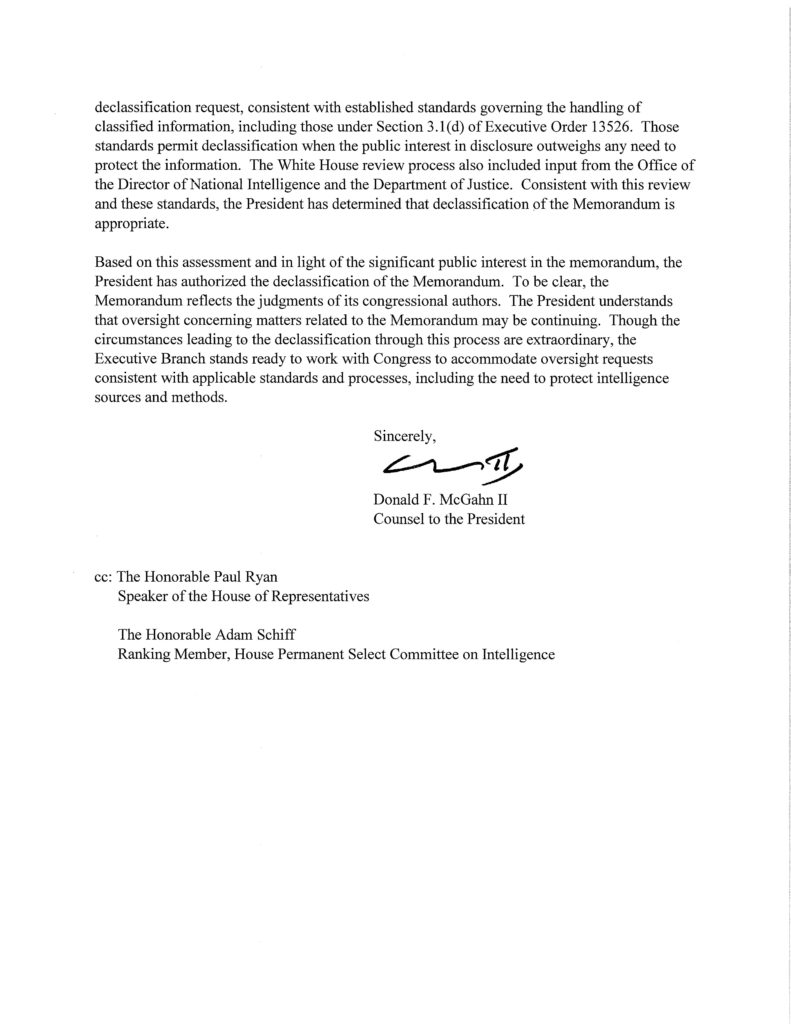 Dear Mr. Chairman:
On January 29, 2018, the House Permanent Select Committee on Intelligence (hereinafter “the
Committee”) voted to disclose publicly a memorandum containing classified information
provided to the Committee in connection with its oversight activities (the “Memorandum,”
which is attached to this letter). As provided by clause II(g) of Rule X of the House of
Representatives, the Committee has forwarded this Memorandum to the President based on its
determination that the release of the Memorandum would serve the public interest.
The Constitution vests the President with the authority to protect national security secrets from
disclosure. As the Supreme Court has recognized, it is the President’s responsibility to classify,
declassify, and control access to information bearing on our intelligence sources and methods
and national defense. See, e.g., Dep’t o/Navy v. Egan, 484 U.S. 518,527 (1988). In order to
facilitate appropriate congressional oversight, the Executive Branch may entrust classified
information to the appropriate committees of Congress, as it has done in connection with the
Committee’s oversight activities here. The Executive Branch does so on the assumption that the
Committee will responsibly protect such classified information, consistent with the laws of the
United States.
The Committee has now determined that the release of the Memorandum would be appropriate.
The Executive Branch, across Administrations of both parties, has worked to accommodate
congressional requests to declassify specific materials in the public interest. l However, public
release of classified information by unilateral action of the Legislative Branch is extremely rare
and raises significant separation of powers concerns. Accordingly, the Committee’s request to
release the Memorandum is interpreted as a request for declassification pursuant to the
President’s authority.
The President understands that the protection of our national security represents his highest
obligation. Accordingly, he has directed lawyers and national security staff to assess the
1 See, e.g., s. Rept. 114-8 at 12 (Administration of Barack Obama) (“On April 3, 2014 … the Committee agreed to
send the revised Findings and Conclusions, and the updated Executive Summary of the Committee Study, to the
President for declassification and public release.”); H. Rept. 107-792 (Administration of George W. Bush) (similar);
E.O. 12812 (Administration of George H.W. Bush) (noting Senate resolution requesting that President provide for
declassification of certain information via Executive Order).
declassification request, consistent with established standards governing the handling of
classified information, including those under Section 3.1 (d) of Executive Order 13526. Those
standards permit declassification when the public interest in disclosure outweighs any need to
protect the information. The White House review process also included input from the Office of
the Director of National Intelligence and the Department of Justice. Consistent with this review
and these standards, the President has determined that declassification of the Memorandum is
appropriate.
Based on this assessment and in light of the significant public interest in the memorandum, the
President has authorized the declassification of the Memorandum. To be clear, the
Memorandum reflects the judgments of its congressional authors. The President understands
that oversight concerning matters related to the Memorandum may be continuing. Though the
circumstances leading to the declassification through this process are extraordinary, the
Executive Branch stands ready to work with Congress to accommodate oversight requests
consistent with applicable standards and processes, including the need to protect intelligence
sources and methods.
cc: The Honorable Paul Ryan
Speaker of the House of Representatives
The Honorable Adam Schiff
Sincerely,
~~
Donald F. McGahn II
Counsel to the President
Ranking Member, House Permanent Select Committee on Intelligence

; .1)
140Y BBOM’;I1f0FBa
PROPERTY OF THE U.S. HOUSE OF REPRESENTATIVES
‘1161 OJ3@!M3IIJ1 f15f GIG ,
5) The Page FISA application also mentions information regarding fellow Trump campaign
advisor George Pafladopoulos, but there is no evidence of any cooperation or conspiracy
between Page and Papadopoulos. The Papadopoulos information triggered the opening
of an FBI counterintelligence investigation in late July 2016 by FBI agent Pete Strzok.
Strzok was reassigned by the Special Counsel’s Office to FBI Human Resources for
improper text messages with his mistress, FBI Attorney Lisa Page (no known relation to
Carter Page), where they both demonstrated a clear bias against Trump and in favor of
Clinton, whom Strzok had also investigated. The StrzokILisa Page texts also reflect
extensive discussions about the investigation, orchestrating leaks to the media, and
include a meeting with Deputy Director McCabe to discuss an “insurance” policy against
President Trump’s election.
UNCLASSIFIED
161 3£CI&I))1461 6I~
PROPERTY OF THE U.S. HOUSE OF REPRESENTATIVES