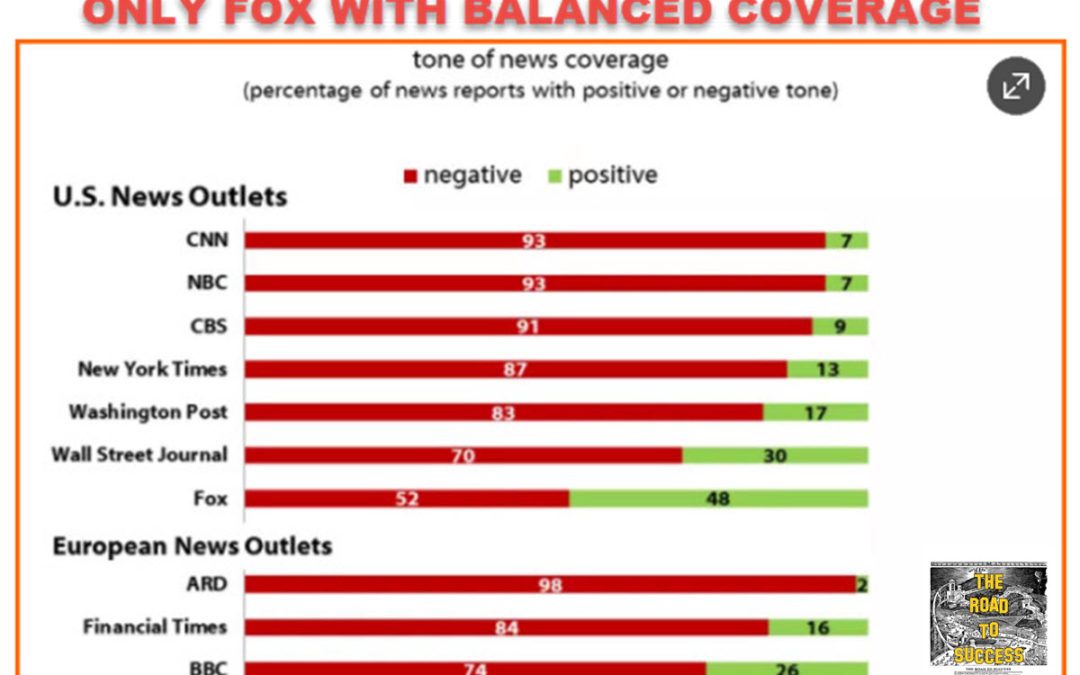 How come we weren’t asked to shelter in place or wear masks in 1968-9 when the Hong Kong flu killed as many people in the U.S. as the Corona Virus in 2020. The below article by Bernard Goldberg may help answer this… Goldberg has been there right in the belly of the beast the whole time, working for left -leaning CBS and even almost defended the media bias then in 2001as ‘group think’ . But now , he says that since 2016 and the Trump Administration the bias has gotten out of hand and has truly become CONSPIRACY NEWS, working with the dem party in their efforts to bring down the Republican Trump Administration

Media Bias In the Age of Trump

My latest column is now online. You can read it on my website here, or — for your convenience — I’ve posted it below.

Almost 20 years ago, after my first book Bias came out, I made a lot of speeches – some of them to conservative organizations.

The book was about liberal bias in the mainstream media.  I had been a journalist at CBS News for 28 years and so it was a behind the scenes expose about how the sausage was made, about how bias made its way into the news.

I said that despite what many conservatives think, there was no conspiracy to slant the news in a liberal direction.  I told them that there were no secret meetings, no secret handshakes and salutes, that anchors like Dan Rather never went into a room with his top lieutenants, locked the door, lowered the blinds, dimmed the lights and said, “OK, how are we going to screw those Republicans today.”

It didn’t work that way, I said.  Bias was the result of groupthink.  Put too many like-minded liberals in a newsroom and you’re going to get a liberal slant on the news.

Liberal journalists, I said, live in a comfortable bubble and didn’t even necessarily believe their views were liberal.  Instead, they believed they were moderate, mainstream, and mainly reasonable views — unlike, of course, conservative views which, to them, were none of those things.

But what I wrote and spoke about then – mainly about how there was no conspiracy to inject bias into news stories — is no longer true today.

Yes, liberal groupthink is still a problem in America’s newsrooms.  But now, in the age of Trump, I believe there actually is a conspiracy.

Smoking gun or no smoking gun, memo to the staff or no memo, everyone understands what the rules are, especially on cable TV (which has much more influence today than in 2001 when Bias was published):  Tell viewers what they want to hear. Tell them what they already believe.  Validate their biases.  Toss them red meat.  Entice them to come back for more.

Pandering is good for business.

There’s supposed to be a line between news and opinion, but too often that line is blurred – or blown up.

Exhibit A. Jim Acosta, CNN’s chief White House correspondent. In that role, he’s is supposed to deliver the facts and leave it up to his audience to draw its own conclusions.

Yet he says things like, “I don’t think a reasonable person could watch what we just saw over the last hour and conclude that the president is in control … he was ranting and raving for the better part of the last hour”

Ranting and raving?  This is objective reporting?  Maybe that’s how his “reasonable” liberal audience sees it, but to “reasonable” conservatives the president may simply have been defending his position against unfair news coverage.

Or he reports that, “The President seems to harbor racist feelings about people of color from other parts of the world.”

According to who – besides Jim Acosta and his fellow liberals?

And Jim Acosta is hardly alone in his disdain for the president.  Consider a page one story that appeared in the New York Times on May 19, 2019.

On that day, two of the paper’s top political reporters, Jonathan Martin and Alexander Burns, wrote that in 2016, Donald Trump ran an “unabashedly racist campaign.”

They easily could have written that “some claim” he ran an “unabashedly racist campaign,” but among the many liberals at the Times, it’s not an opinion that Donald Trump is a racist – it’s a fact.

As Kimberly Strassel puts it in her book, Resistance at All Costs: How Trump Haters Are Breaking America, “Sure, when it comes to the Trump administration, the press rides herd on every issue. But when it has come to former Obama officials (Jim Comey, Andrew McCabe, John Brennan), the media has swallowed everything it is told. It’s hard to explain just how big a dereliction of duty this is.”

And bias shows itself not only in what’s reported – but also in what’s ignored.

When Tara Reade went public with an accusation that then-Senator Joe Biden sexually assaulted her when she worked in his Washington office in 1993, “ABC, NBC, CNN and MSNBC all invited Biden on their airwaves for interviews, but they refused to confront him even once about these allegations,” the conservative Media Research Center reported. “Out of 77 questions, not a single one asked the former Senator and Vice President about Reade’s charges.”

As for Tara Reade, the mainstream television media pretty much ignored her.

For over a month, Tara Reade says she hadn’t been invited to tell her story on ABC, NBC, CBS, CNN or MSNBC. Only Fox asked her on. Now that Biden has told his story publicly, it’s a safe bet that some other TV news organizations will finally discover her.  At least one, CBS News, says it already has asked for an interview.

And while we may never know the truth about her allegation, we do know this:  Too many journalists have an unholy alliance with the Democratic Party and its liberal values.

No, that isn’t breaking news. But bias is worse today than it’s been in quite some time — certainly more blatant than when Biascame out in 2001.  And the downward spiral started in earnest on Election Day 2016.

In the age of Trump, the press no longer tries to hide its biases.  It embraces them.  The so-called mainstream media have joined the Resistance. And the worst part is that they’re not troubled by it.

Do journalists actually go into dark rooms and conspire to bring down the president?  I have no idea if the room is dark or not.Jim Acosta,donald trump,fake news1

Douglas S. Okay Bernie lets say I agree with everything you just wrote. And lets say I am a conservative. A conservative that does not like Trump. Because I honestly don’t think he is good for the country. How do I or a reporter like me debate Trumps base. His base that takes everthing he says as fact. And believes that anything other than praise for Trump is fake news. I get it that trump and his base distrust the mainstream media. But they also don’t allow amything in the middle. I have Trump supporting friends that still believe Mexico is paying for the wall. Friends that believe the China (the government) payed the tariffs. It is really frustrating. There should be a way to be critical of this president. And it at least be considered on the strength of its facts. I think a book about “Truth in the age of trump” would be interesting.1wBernard GoldbergHi Douglas. I’ll add this to the Q&A on Friday. Thanks!7d

SCOTT KIDWELL. I did not vote for Trump or Hillary in 2016. I know of no Trump supporter that takes everything he says as fact. Like my Democrat friends who think Biden is just another beltway a letch, but still will vote for him. It is a matter of trade-offs. Not who is great, but who is least objectionable. And I must admit it is fun to watch someone on the Republican side simply refuse to be pushed around by the press of the establishment in DC. Making sausage as always been messy! I will vote for Trump in 2020.21w

Peter JonesI am a Republican and a conservative, some would call me a Rhino-Republican. When it came time to vote for President in 2016, I really struggled. I literally couldn’t stand Trump, I have no illusions about Hillary, but I was very concerned about the direction the Obama Administration had taken us. Frankly, I agreed with about 75% of what Trump had campaigned on, but I wasn’t sure we could trust him. So, although I disliked him and disdained his behavior, he at least offered a glimmer of hope that we could get the country back on track. No, not to make the country more racist, no not to make the country more homophobic, no not to make the country more greedy, no not so the rich to get richer & poor to get poorer. I hoped he would try to reduce some of the nutty regulation that flooded in over the last 30 years that hindered growth and he would select judges that call balls and strikes. Since he was inaugurated he’s done exactly that and plenty of other things I agree with. He still pisses me off with his “I’m the greatest” and me, me, me. However, one has to wonder, what would have happened if he just played the game the way the Republicans have always tried to play the game? Like me, the rhino. … I don’t know for a fact that the FBI tried to get Flynn, I don’t know for a fact that the Obama Administration tried to get Trump, but it sure looks that way. Their friends in the press played right along and shared countless false stories, and did they’re very best to make him look like Attila the Hun and put this country through 3+ years of hell. What did Trump actually do? Did he spy on the press? Did he sick the IRS on liberals? Did he send guns to Mexican drug cartels? Did he actually get information from Russia to use against his political opponent? Apparently, somebody did. … Bernie, he also did one other thing for me – he convinced me that the majority of the Beltway press is in the tank for the Democrats. He totally exposed them for what they are. Guys like me never would have been able to. 5dBernard GoldbergThanks for weighing in, Peter. I hear similar comments from many others. 4dBy becoming a patron, you’ll instantly unlock access to188 exclusive posts43Audio releases145Writ