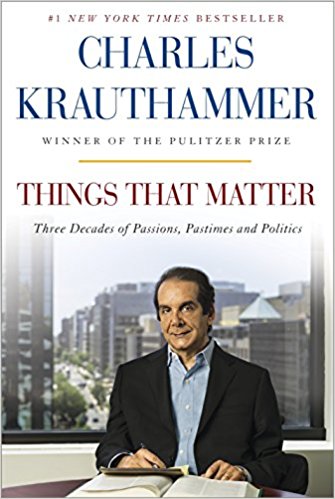 ‘In a fractured media environment where almost no one commands universal respect, where crudity of expression and thought are increasingly the norm, and where most commentators feel compelled to cater to their base, Krauthammer was admired across the political spectrum, unfailingly elegant and civil, and stubbornly independent-minded.’

So much so that the world will be far worse off after having lost one its last true journalists.
As he wrote  in his timeless best seller, Things That Matter, he was about much more than politics. Many never knew to the day he died that Krauthammer was in a wheelchair as he expounded and debated on Fox News and other media on ALL topics and perhaps that affected – and may have even enhanced – his outlook.

One example of NON-political ‘things that mattered’ for Krauthammer was his love for the game of baseball, From FORBES’ tribute,

““If you believe, as do I, that God created baseball as a relief from politics, I herewith offer, as a public service, a column about [Bryce] Harper & friends,” he wrote in an exquisite column for The Washington Post in 2016.”  As a baseball fan, even in today’s changing game, we relate to Krauthammer’s love for the ‘perfect’ game and ‘escape.’.

After a diving accident at age 22 that left him paralyzed, Krauthammer rapidly changed his life priorities including changing from Democrat to Republican.  He always managed to give his opinions in a calm, thoughtful manner that left him above the frey – the frey of shouting, angry pundits no longer real journalists. Krauthammer was a REAL journalist who looked at both sides of issues. He was never a big Trump fan but when the President was elected, Krauthammer was able to sort out the positive from  negative accomplishments of the new President.

There appeared to be no hate or even anger in Krauthammer – unlike many of his almost unwatchable contemporaries we now see spewing nightly invectives at President Trump or any number of others (mostly Republicans).  As NATIONAL REVIEW offers in its tribute of Krauthammer,

“In a fractured media environment where almost no one commands universal respect, where crudity of expression and thought are increasingly the norm, and where most commentators feel compelled to cater to their base, Krauthammer was admired across the political spectrum, unfailingly elegant and civil, and stubbornly independent-minded.

“He believed in American power and the international order it had created, and had no patience for apologists for our enemies or for the gauzy clichés of supporters of “the international community.” A baseline of realism undergirded his thought, and he was equally willing to puncture the fantasies of the Left and, as necessary, the irrational enthusiasms of the Right.”

From Fox News, where he called ‘home’ in recent years,

” Charles Krauthammer, a longtime Fox News contributor, Pulitzer Prize winner, Harvard-trained psychiatrist and best-selling author who came to be known as the dean of conservative commentators, died Thursday. He was 68.

His death had been expected after he wrote a heartbreaking letter to colleagues, friends and viewers on June 8 that said in part

‘I have been uncharacteristically silent these past ten months. I had thought that silence would soon be coming to an end, but I’m afraid I must tell you now that fate has decided on a different course for me…

Recent tests have revealed that the cancer has returned. There was no sign of it as recently as a month ago, which means it is aggressive and spreading rapidly. My doctors tell me their best estimate is that I have only a few weeks left to live. This is the final verdict. My fight is over.” The letter continued, “I leave this life with no regrets. It was a wonderful life — full and complete with the great loves and great endeavors that make it worth living.”

‘ Krauthammer was arguably a Renaissance man, achieving mastery in such disparate fields as psychiatry, speech-writing, print journalism and television. He won the Edwin Dunlop Prize for excellence in psychiatric research and clinical medicine. Journalism honors included the Pulitzer Prize for Commentary for his Washington Post columns in 1987 and the National Magazine Award for his work at The New Republic in 1984. His book, “Things That Matter: Three Decades of Passions, Pastimes and Politics,” instantly became a New York Times bestseller, remaining in the number one slot for 10 weeks, and on the coveted list for nearly 40.

Krauthammer delivered his views in a mild-mannered yet steady and almost philosophical style, befitting his background in psychiatry and detailed analysis of human behavior. Borrowing from that background, Krauthammer said in 1990, after the fall of the Berlin Wall, that the post-Cold War world had gone from bipolar to “unipolar,” with the United States as the sole superpower. He also coined the term “The Reagan Doctrine,” among others.’