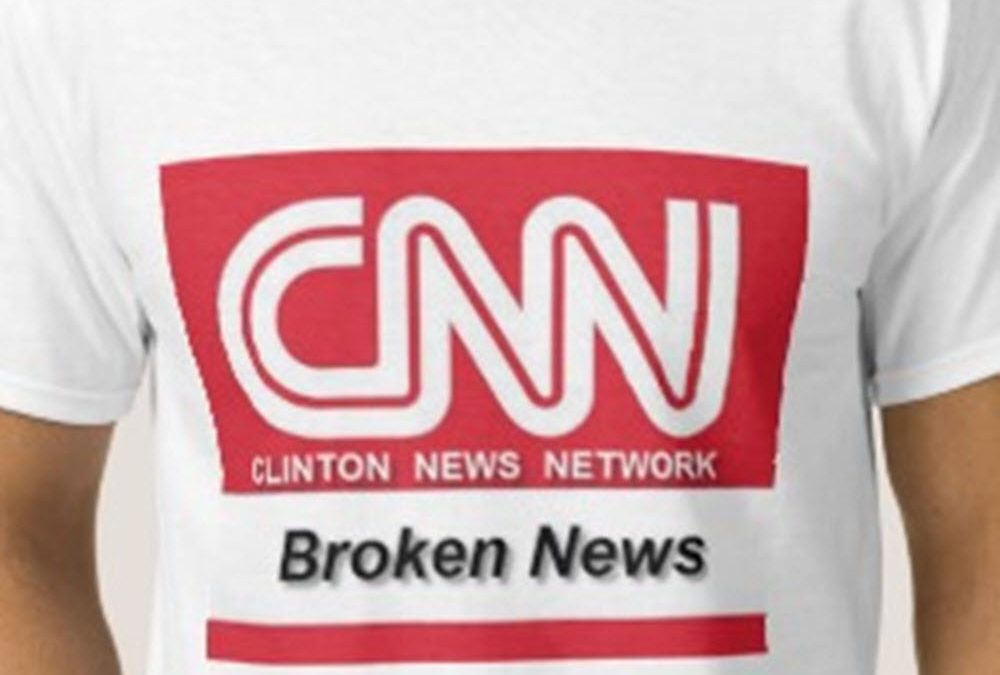 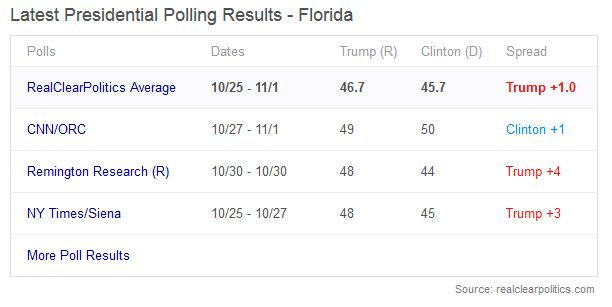 11-1-16  Don’t believe ‘Smart(?)’poll and others that claim 28% Republicans in Florida are voting HIllary. More Media Bias – think about it… With all the regular polls like NY Times,Real Clear, etc.  showing Trump ahead and all the new negative publicity why would 5% of GOP vote Hillary> don’t believe polls anymore unless maybe an average of all

LATEST VOTER FRAUD ALLEGATIONS FROM NEW YORK CITY COMMISSIONER OF BOARD OF ELECTIONS!

Why all the variation in polls? Where did the science go?  Below probably the most accurate poll (IBD) 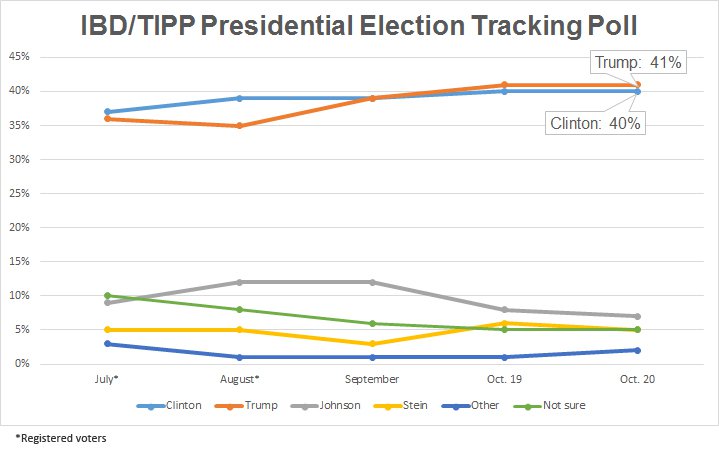 The only official poll that has predicted the recent Presidential elections has Trump up by one point after Debate #3. Other polls seem to have no science to them, based only on thier viewership (eg CNN)

Why all the variation in polls? Where did the science go?

When I was a journalism student in the 1960s our teacher impressed on us that the most important aspect was to fairly present both sides of the issue.  I’m sure that same teacher is turning over in her grave today. Not long after I took that course  journalism , including polling, changed.  Perhaps with the free speech movement we were given so much freedom people, including reporters, started writing whatever they wanted.  No checks and balances. Liberal America had taken hold with the Flower children reporting of the late 60s and beyond. And things have only gotten worse today. FREE Speech became anything but…a true oxymoron foisted upon us by the left, just as they’ve blamed the right for being responsible slavery, which we’ve only learned recently, thanks to Dinesh D’Souza that it was the Democrats. Even the Presidential  Polls, which at one time we could pretty much accept accurate within their percentage of error, have gone wrong.  Even Gallup got out of the business recently, having to compete with so many erroneous polls, which no longer approach their job scientifically, but rather, politically.    EXAMPLE:  Following the Presidential conventions, Hillary Clinton was tied or a point aheAd of Donald Trump in most of the polls after a slight bump from her DNC convention. Since then the white house and  media industrial complex have controlled   the polls, politically, much like they did after Donald Trump’s speech at the RNC, after which we learned , in lockstep, from most media that Trump’s speech was ‘very dark’ in those exact words as compared to Hillary’s  ‘positive’ speech and ‘patriotic’ DNC convention.  Since then , in recent weeks the polls have suddenly turned on Trump and ratcheted up the Hillary steam, with the election closing in, now only three months away.. But, the way they turned was unlikely, with Hillary suddenly leading by 8-15 points not the 0-1 point.  Even with Trump’s back and forth tiff with the Kahns,  one wouldn’t expect more than a one or two point change at most but 8-13 points, (see above chart) makes no sense. And, the polls are all over the place; at least you’d think there’d be some consistency as years ago. http://wakeupamerica.roadtosuccess.us/2016/10/trump-first-to-expose-rampant-media-bias/ You have the normally very liberal on one hand showing HIlary only one point ahead of Trump (Los Angeles Times) where you have most others showing her 8-13 points ahead, the LA Times probably an anomaly; usually it’s the more accurate polls that would show a more narrow divide.  But, the main point is that accurate polls should not be showing such a great disparity, well over the 3% plus or minus.Many, like Kelly Ann Conway, also speak of the ‘hidden vote’ much like we saw at the mid-term elections in 2010 and 2014 when Republicans surprised the pollsters with unexpected, landslide wins.  Perhaps we should do our own , survey, below. Can’t be any more inacurate than the polls- maybe much more accurate

Longtime polster Kelly Ann Conway  strongly questions the sudden, large point differential in most of the polls.  Not just the discrepancies but she says that conservatives tend to poll much higher online. One can just look at Trump’s social media which has about three times more followers than Hillary Clinton .  She believes the accurate current polling has Hillary no more than three points ahead of Hillary,  not the 8-15 point margin shown in many of the polls.   But, don’t be surprised the polls to come up with whatever they want from now to the election. Just shave 5-10 points off what they say and you’ll probably have a more accurate reading 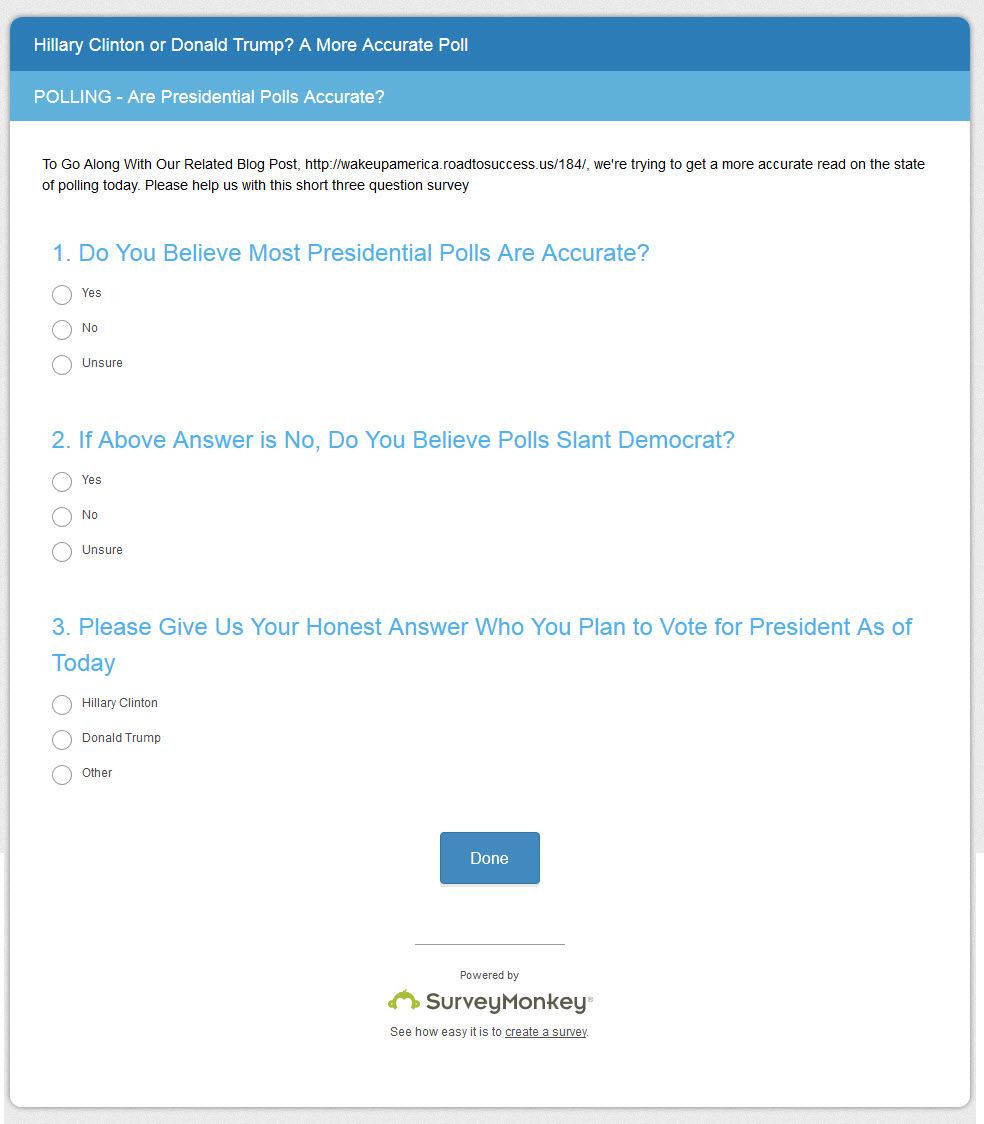 Time to really embarrass the ‘crooked’ mainstream media –if that’s  possible – that no longer are REAL journalists but shills for Hillary and the Democrat Party. When we took journalism in school years ago we learned the most important thing was to report on BOTH SIDES of an issue(s). Well, that seemed to disappear years ago and has only gotten worse especially in the current election process with media taking obvious sides, generally favoring the left. 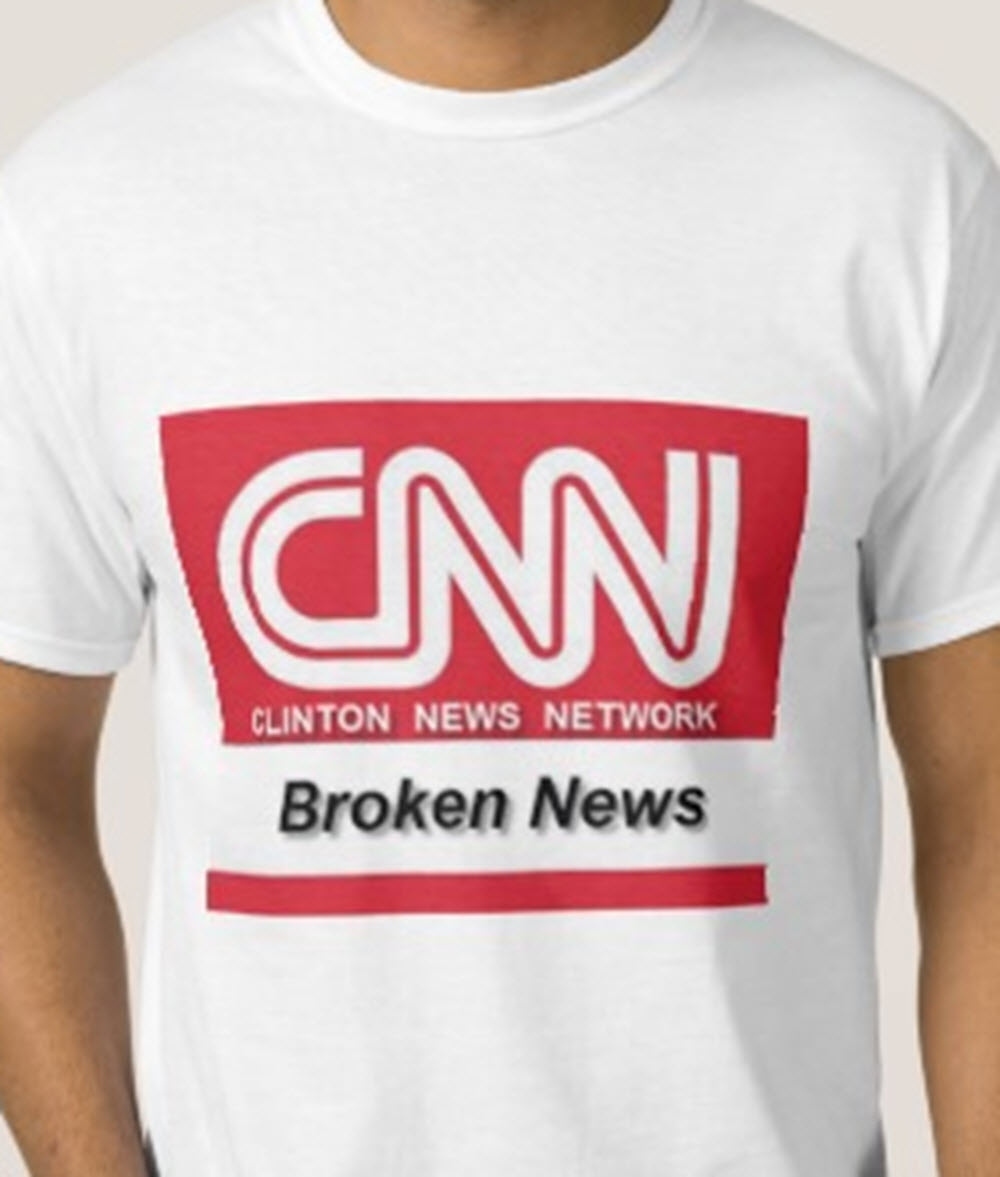 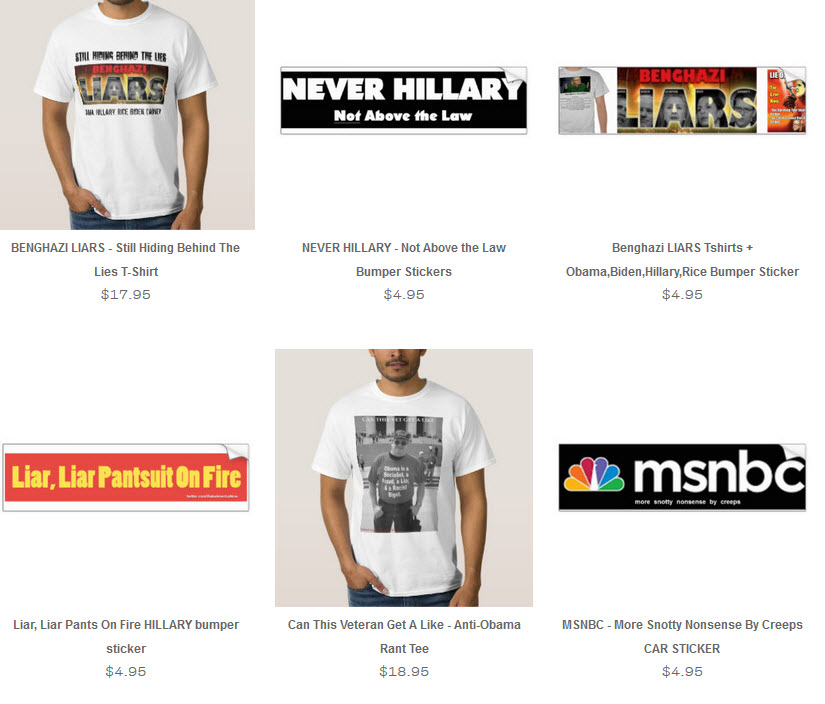 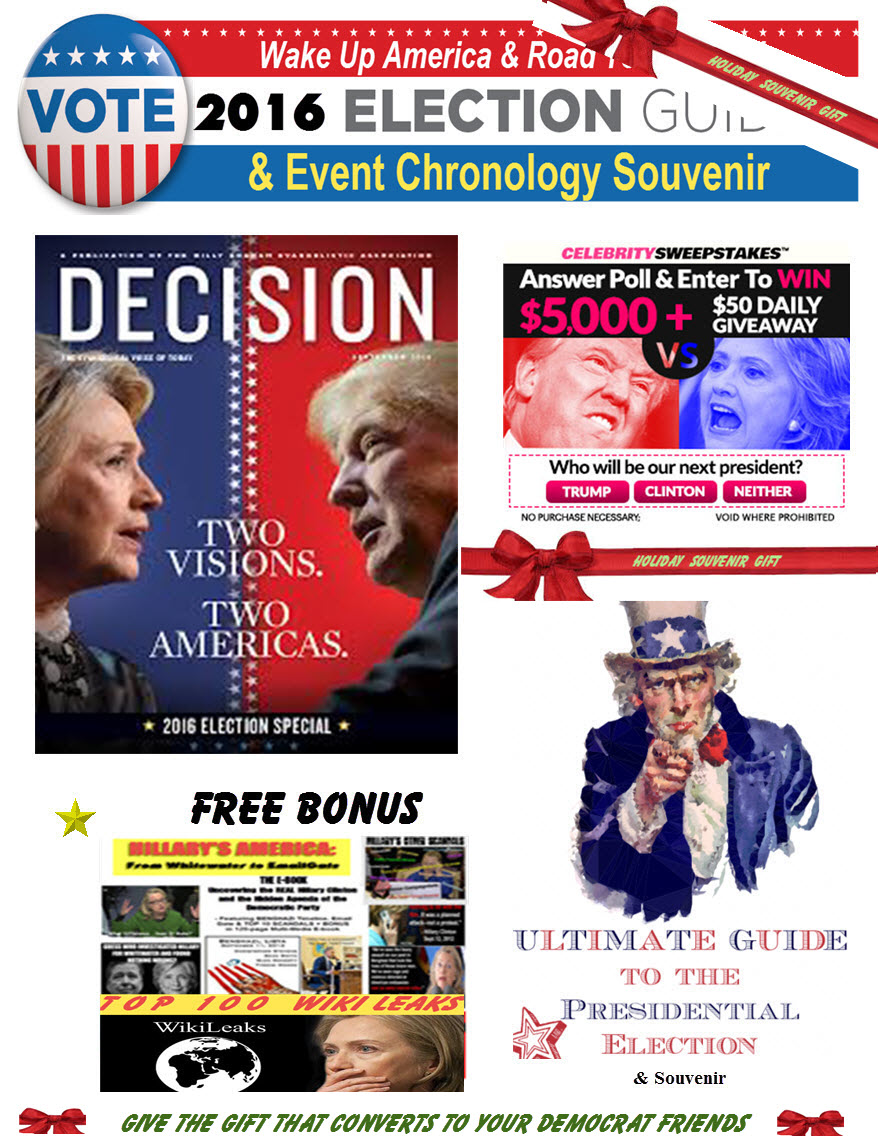